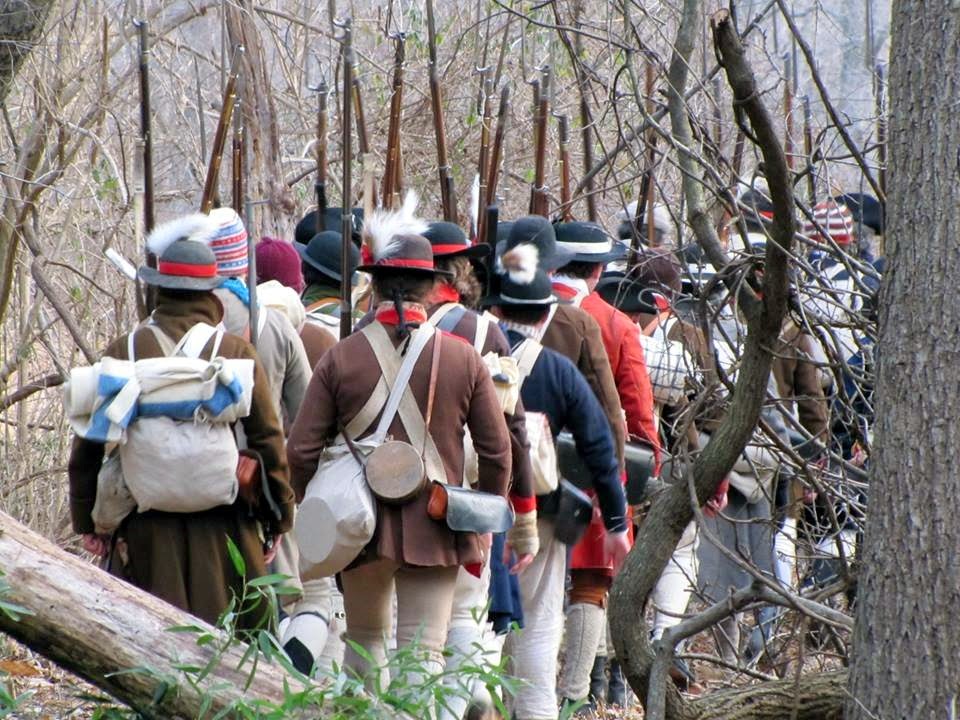 The folks who took the real time battlefield tour in Princeton, NJ this year got a surprise.  A Pennsylvania Associator company appeared right where they were in 1776. We maneuvered and fired as if fighting ghosts of the 17th Regiment of Foot. We marched all night to get there.

The scheme started with some young chaps determined to recreate Charles Wilson Peale's Company for one weekend. Seldom do we get to test our gear and clothes to the limit. It all started at the Old Barracks in Trenton on Friday. Thirty-odd souls assembled in uniforms specific to the Philadelphia militia of the period. We drilled, rations were issued and cooking was by mess. We were entreated to sign on for another six weeks to save the cause.

Thomas Paine's The American Crisis read aloud by bondfire is inspiring. Sleep was hard to come by as his Excellency General Washington ordered us to march around the enemy at midnight. The plan was to fall on the rear guard in Princeton. The roads are still there, replaced by pavement and the distance is thirteen miles. A cold moon lit the way.

Those who marched were changed by the experience. A few impressions remain: the drummer with an ice sheet forming under his canteen; blistered hands leaking under the weight of a shifting musket; the hissing of leather shoes; the best pea soup ever; sparkling frost on gaitors at dawn. It's why we do this.

Posted by the drunk tailor at 5:11 PM