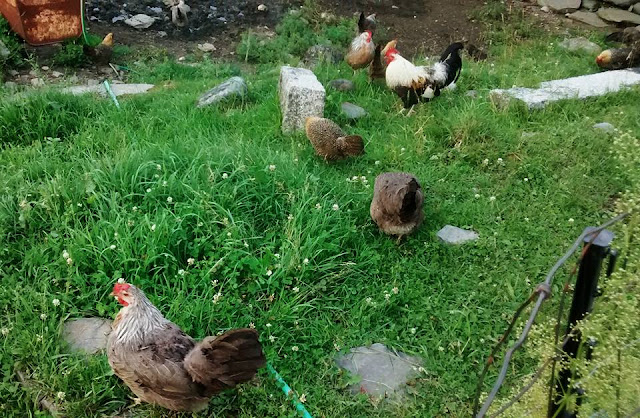 Historic homes are a pleasant fiction. Most held generations of families or were sold more than once. They may have been gutted or had plumbing and heating installed. To restore them back to a particular year seems impossible. How do you know how they were before?

First, what walls have been moved/removed? What going on with the stairs? What were the rooms used for originally? Fortunate is the curator who has an inventory of all the furniture by room. Mostly it's guesswork. But what if a direct descendant, living four hours away, offers to donate a bed that was known to be in the house 200 years ago? Just needs to be picked up.  That's an adventure worth having. Kitty's job took us to the wilds of Vermont. Driving a large cargo van is an exercise in faith. Best just to shout "WITNESS ME!" When changing lanes.

The donor is delightful, a wise woman of 85. Like the house it came from, the bed had been upgraded, it's rope pegs cut off to take a modern box spring. The handiwork was unmistakable: small carved roman numerals marked every groove and slot. The hand carved posts are perfection. You know you are in Vermont's hinterlands when Google's hotel and dining recommendations start near Montreal.

Time to tackle the terror of flap pockets. Here is the back of the trousers and pocket (with cover in place.) The top of the bag back will act as trouser front for the waistband. The L-shaped bit at bottom left is where the flap stops and the leg seam begins. It's confusing. There are more photos here. It's easier to assemble the pants first, then sew the pockets together. Just don't sew the flap to anything. 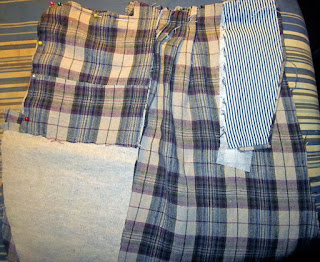 Here is the even more confusing front. The bag front is pinned on, and the L-cuts don't match the trouser fronts exactly. Not a problem since the whole thing gets trapped in the seam. Pleats peek out from the pocket edge, and the stripey bearer lining is evident. The edge of that wonky L-notch on top lines up with the bag back and completes the waistband front.  Next come the waistband, buttons and button holes and the outside leg seams.

Posted by the drunk tailor at 8:22 AM