"I am exceedingly obliged for your exertions in forwarding reinforcements to this army. I like your plan exceedingly of equipping the troops with Jackets, as I am persuaded these may be had, and coats cannot; and tho' they are not quite as sightly, they will serve to render them comfortable." 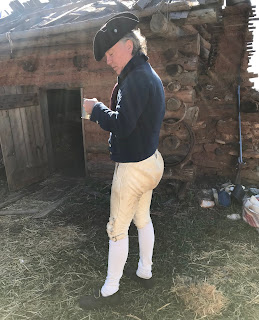 Back to our favorite obsession, the US Southern Army in North Carolina. Fort Dobbs timeline hosted Kitty for the first time (as a disgruntled 16th century colonist,) and the fifth iteration of the ragged-ass Continental. A dearth of roads and wagons left them under supplied, but years of experience made them tough with a taste for campaigning.

The above tantalizing clue from Greene's correspondence paints an interesting picture of the time before Guilford Courthouse. Steuben appears to have pushed jackets pretty hard as a remedy to uniform shortages. Quality was lacking, and they were unlined, but better than nothing.

Philip Katcher's Uniforms of the Continental Army, describes rebuilding the North Carolina regiments after the debacle at Charleston. The public store at Halifax had "Pieces Course Blue Frieze," as well as "Soldiers woolen Jackets." Were jackets waistcoats? Did they have sleeves? 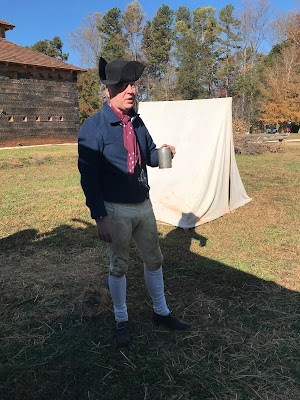 As a purely speculative venture Kochan and Phillips serge was laundered repeatedly to give it a frieze-like hand. The jacket is similar to British light infantry types. Cheap and cheerful. It should cover the waistband of the breeches or overalls.

Here is where photographs come in handy. Even with the shadows the body of the jacket looks okay, but the sleeves are way too big. A bunch of material can be removed from the seams to make them snug. Leave some ease around the elbows.

Always good, especially with new projects to look at photos of yourself for fit issues. Similarly a breeze on your hind quarters means your shirt is too short. A blanket cape is a great accessory to shield the public.

Posted by the drunk tailor at 9:19 AM