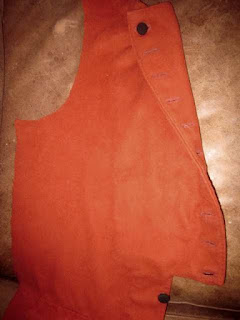 Progress. Being trapped in an airport in New England helps. Creating twenty-three button holes, only fourteen (at most) of which will ever be used seems silly. The Taylor's Complete Guide (1796) reminds us: "...we should recommend the making holes down both sides for the advantage of the wearer, lest any unforeseen accident should happen from dirt, and the wearer's day's pleasure be spoiled, by not having the opportunity of changing the other side of the breast."

Since the lapels can be turned out, the first three buttonholes have their knots towards the inside to match the gradual shift of the lining edge. With any luck this will be ready the first weekend in March. The Boston Massacre. 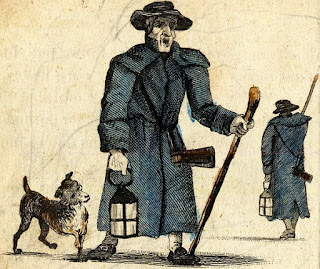 Night watchman Edward Langford saw a man killed that night. We know because his testimony helped convict a soldier. Recreating an actual person is strange. A quick image search produces the typical 18th-century English watchman. The hat, coat, staff, lantern and wooden ratchet (noise maker) appear over and over. Nice dog too. Many cities established similar patrols at the end of the 17th century. At first it was a civic duty, later a city job.

It's tempting to replicate this chap, except he is in London, not Boston. Time to dig deeper. The Massachusetts legislature rewrote the laws pertaining to Watches and Wards in 1796: "Be it further Enacted, that whenever a Watch shall be so appointed and agreed upon, different from a Constable's watch, the number and qualifications of the persons whereof it shall consist, shall also be agreed upon by the said Inhabitants of the Town, observing the rule prescribed in the first Section of this Act; and one sober, discreet, able-bodied householder shall be appointed officer of the watch, by said Justices, & Selectmen, or
Selectmen alone (as the case may be) to take the charge and command of such watch, who, as the badge of his office, shall carry a quarter-pike, with a spire on the top thereof; and every Watchman, as well in this as in the Constable's watch, shall carry a Staff with a Bill fastened thereon, as is usual. And the powers & duties of the said Officer & Watchmen shall be the same as are before prescribed in the second Section of this Act in the case of a Constable's Watch."

As is usual? The Bill is a Medieval weapon, muscular cousin of the fascine knife. No doubt, the Tower of London was glad to dispose of their surplus in the colonies. Boston's King Street watch house used one to grab a prisoner in their fight with some red coats in 1769. Perhaps the pole arms were for such emergencies. With help from J.L. Bell's spectacular blog we can look closer at Boston. Yankee thrift meant no ratchets or swords, but a staff and a lantern are indicated. The ratchet was cheap on eBay, too (damn it.) As Kitty would say "context is critical." Many thanks to her for help with this post. 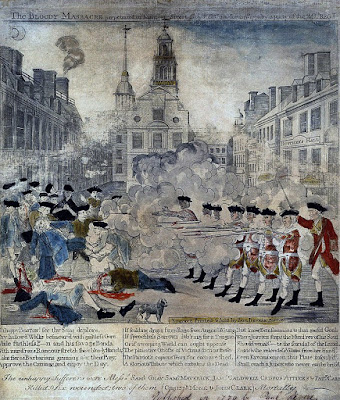 What IS that dog doing there?