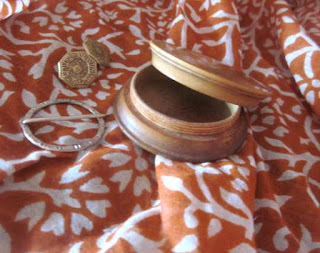 He reeks of tobacco more that usual. Watchman Langford sits on his cold bed, undressing. He smoked his week's allowance in a single night. The glob of what looks like egg on his shoe must be Samuel Gray's brains. At least he has stopped shaking: a mixture of exhaustion, fear, and rage. As he enters his tiny room at dawn he barely notices the new red cloth hanging from his neighbor's window. Smallpox quarantine. Time for some rest. Not sleep, there has been no sleep for days. He hates his job and he is beginning to hate his adoptive home of Boston.

We are in strange territory. It's fun to dress in old timey clothes and shoot muskets, but it gets boring. It feels strangely inadequate to play the part of an actual person in 1770 Boston and not know about his life and motivations.  We are trapped between costuming and some sort of experimental theater. At the same time, the fossil view of history is equally strange. Some tiny percentage of dinosaurs actually died in the right place at the right time to get fossilized. Discovery Channel does cool shows, but there are tons of critters we may never know about. So many missing details.

Replicating what survives in museums and basing clothing on one or two period images is better than just making things up, but there is so much more out there. Most reenactors spend weekends pretending to be at war, socializing on Saturday night, with repeat performances on Sunday (often slower due to hangover.) If there is interaction with the public, it takes the form of a lecture on historic facts or basic musket function. Humans are comforted by ritual, and the public has come to expect this routine. They may or may not learn anything.

While faux battles are exciting, the dogs, chickens, laundry, drunks, women, and children seen in period illustrations are missing. It's the fossil view. Living history needs more (God help me) Hollywood. There has to be a way to add mundane things back. 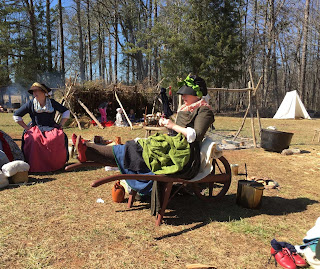 These folks are well on their way. While the site raises money to rebuilt the mid-18th century fort that once stood here, life on the Carolina frontier continues. Rumors of Cherokee attack bring refugees from surrounding farms. Laundry gets washed, beer is brewed. Have a look inside the cabin the Provincials built to survive the winter until the fort is finished.

Four months after he was hired, Langford watched the regulars march into Boston with fife and drum, colors flying. His life became much more complicated. No more walking his beat alone. His partner, Constable Burdick never hesitated or showed fear. When soldiers disobeyed him or caused trouble, Burdick simply beat them. As an Anglican, Langford loves his king, but his representatives treat everyone in the town like dirt. Night watchmen have little authority, even less with men in uniform.

The winter of 1770 terrified Langford. He was used to scuffling with groups of teens some nights, chasing the howling urchins with their three-legged dog, but never catching them. He watched a pretty street vendor steal fence posts for firewood, but chose not to stop stop her. Now there were mobs marching with effigies, bond fires, children shot, houses being torn down, and he felt helpless. Foreign sailors from god-knows-where brawled and swore.  His threats of jail fell on deaf ears. Burdick started carrying a sword. Home and safe, Langford curled in a ball and closed his eyes. The grim face of Private Killroy illuminated by the pan flash of his musket would not leave him. 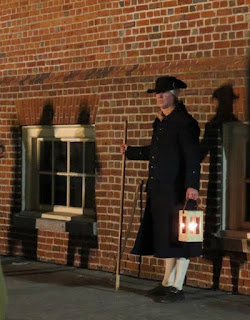 Why can be as important as what you wear.
Posted by the drunk tailor at 8:54 AM