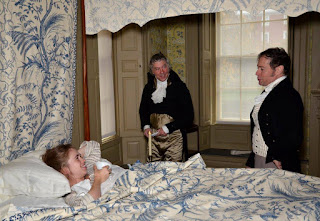 Time to retire, after the most extraordinary history day yet. John Brown House returned to 1799 Saturday. The Browns, their friends and servants, took tea in period bowls and sat on antique chairs and sofas. The inhabitants were interpreters who studied period sources for weeks to play people who lived and worked in the home at the start of the 19th century.

Along with their duties, maids served as guides for visitors and related gossip as the day progressed. Stairs made their task even more strenuous. 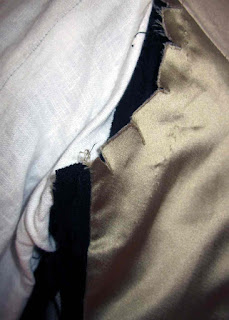 The late 18th-century coat barely survived. It went together (too) quickly for the event and has some flaws that need to be addressed. The lining side actually tore. The sleeve lining seam pulled away, but the outside remained unscathed. The cuffs need to be removed and rotated out slightly.

The collar is a nuisance. The top button needs to be moved out, or a third one added. Pad stitching is uncommon in this period, but some stabilizing stitches could help. Steaming and shaping are good idea. The tails are too long. Stay tuned for improvements. 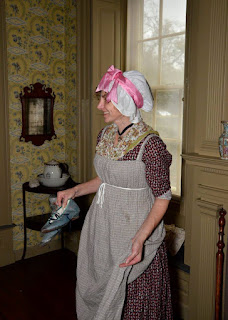 The creator of all this historic madness is our own Kitty Calash. We used her dishes, cutlery, and &c. The Brown's letters, journals, and articles on late 18th-century Providence were shared online. Participants were selected based on age matches to historic figures. Past What Cheer Days had a script and schedule, but the free-form version worked just as well.

Brown family artifacts and furniture, items with Rhode Island provenance, were safe in the corners, as less valuable antiques took their place. Modern lighting disappeared. As it was a gray day the house was dark (history is darker than you think.)

An outline of the day got us rolling, and interaction improvised. Before long visitors were following characters room to room as the drama unfolded. It was as cool as it sounds.

(all event photos by J.D. Kay)