Words. Details can be maddeningly elusive in the past. The Continental Army coat started out well enough. There were good sources that helped shape the color and style of this coat. Then there weren't. Always good (painful) to check footnotes. Construction of the coat has passed the point of drastic changes. Since details are often few in letters, orderly books, and journals, the meaning of words becomes key. There are coats and there are jackets. 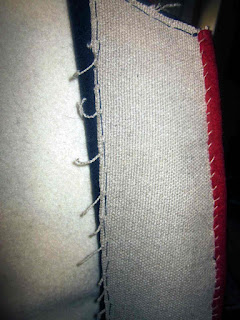 This might look familiar. The white at left is the belted waistcoat. Wrapped around the right edge of the canvas interfacing is the red strip of a lapel. Hooks and eyes get fixed at top right. Only a skirt lining in this coat.

The America Southern army was nearly destroyed in 1780 at Charleston. General Gates did his best to destroy the replacement Army two months later. Gates replacement, General Greene discovered a dearth of roads and wagons in the Carolinas. States like Maryland struggled to get clothes to their nearly naked troops. 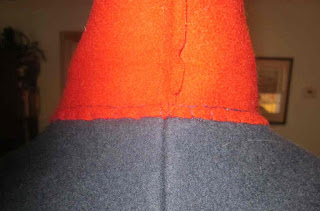 Steuben put a bug in Greene's ear about jackets. Jackets were not as "sightly" as regimentals, but easier to make and better than nothing. Here is the single layer collar turned to the outside. The seam will be covered by the collar. Greene described the jackets as "in the form of British Light Infantry Coats; to come down as low upon the hips as the waistband..." 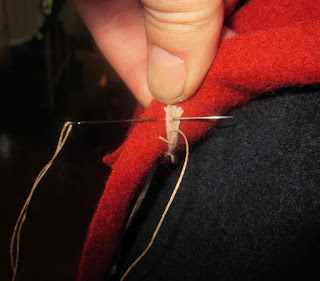 Since the buttons have short shanks, it's easier to apply linen tape to the lapels--till you get to the collar. None of this is visible when finished. To muddy the waters further, the 1780 Board of War specifications state coats should come to mid-thigh, and have functional lapels, and collar.

Always nice to know what they were supposed to have. There is period imagery of British Lights with square cut jackets as early as 1777. This is probably what Greene is talking about. No lapels, no skirts, "with sleeves" implying that sometimes they were without like a waistcoat. Blue and red is a safe choice for mid-Atlantic Continentals, but not sure. Already ideas are forming for another coat.
Posted by the drunk tailor at 10:27 AM