High Life under the stairs 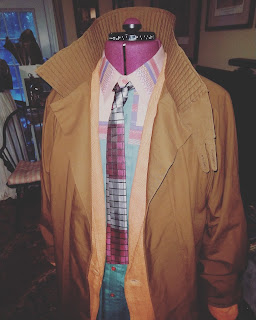 It's been awhile. Kitty and I have been engaged in long discussions about time drag and what we want to do in the future. The amount of misogyny and prejudice in certain time periods is depressing. Guns are nice, but I'm having a hard time getting excited about recreating conflict and nothing else.

Deckard's rain coat is a welcome distraction. Kitty's Bernina sewing machine is a joy to use, even for button holes. Collar quilting became swift and actually presentable. Can't wait for the first rain storm after it's finished. 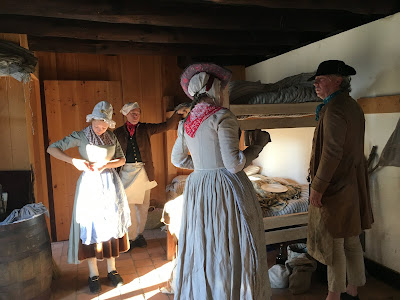 July 2nd, 1777 at Fort Ticonderoga: Always count on these folks to create a rich 18th-century environment of all classes. Their latest event included a servantpalooza of sorts. The New Englanders that made up the Rear Guard included a dozen officers. There was not quite enough help for all of them, and some had never taken on the role of servant before, but it went surprisingly well.

Kitty was tasked with feeding the servants (the officers had their own cook.) Since we were not paid, she broke into the Officer of the Day's quarters and stole from the Army payroll. There was a pleasant tension between the camp followers and the servants. If done correctly, serving is hard work. Lots of stairs between kitchen and quarters. What happens when your captain is late to a meal and the lieutenant asks you to do some sewing for him? Cleaning and polishing shoes in the dark is tedious. Without an actual economy it's hard to do things like laundry and gambling. It's also hard for 21st-century Americans to stop saying "please" and "thank you" to those below them. Maybe they were never good at it. 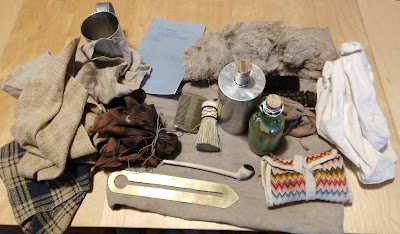 The right tools help. At left are the contents of a simple American servant's wallet. Clockwise, from lower left: Napkins, a rag and tin cup, "The American Crisis," wads of tow, shoe cleaning and blacking brushes, a linen cap, brick dust, a sewing kit and white ball, an oil bottle, comb, and dish washing brush, a pipe, button stick, and black ball. Not pictured: a clothes brush, apron, and a nice bottle of port stolen by the colonel's servants. This just in: prosthetic muttonchops have been delivered via post. More on that later.