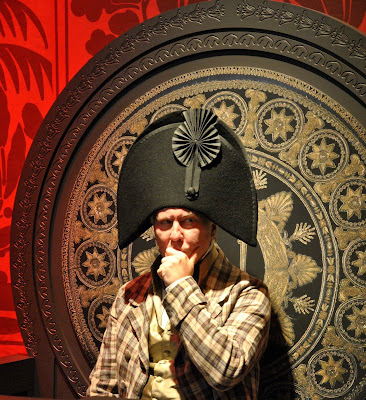 These are trying times. The Deckard coat collar is too small and needs to come off. The prosthetic side burns failed miserably. There are two weeks left to finish some 1830's trousers. Solution: road trip. Kitty and his Drunkenness spent the weekend in Richmond, with Saturday devoted to the fabulous exhibit at the VMFA. I can't say enough good things about the museum or the exhibit. It is what history museums should be. No detail was too small: the walls are etched with French Imperial motifs, wind-tossed trees are projected around hunting displays, large gold objects get blue gel filters to make them even more magnificent. The exhibit focuses on the household rather than the man. The food and cocktails at the restaurant are also sublime. 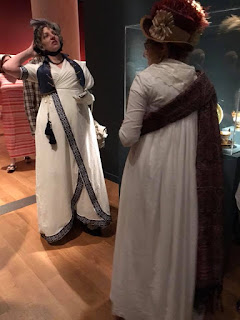 Equally pleasing was being reunited with the Regency Society of Virginia. They took most of these photos, arranged the outing in costume, and are always welcoming. The meta aspects of touring a museum in clothing worn by America's earliest tourists gratified us. As did the obvious military influence on our fashion reflected in the paintings. Kitty's hussar waistcoat and my cossack trousers and chapeau are late 18th to early 19th century cargo pants and camo. The nostalgia of dressing up for an outing was a bonus.

The emotional aspects and the interactions with the public are unique to this outing. The time period allows for expanded roles: sketching parties, collecting insects and plants for study, recreating leisure time with leisure time. 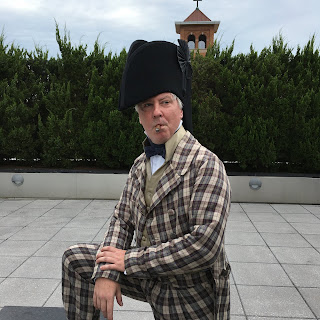 Napoleon is on exhibit in Richmond till September 3rd, 2018. See it if you can. Make sure to call and ask if you want to attend dressed up.