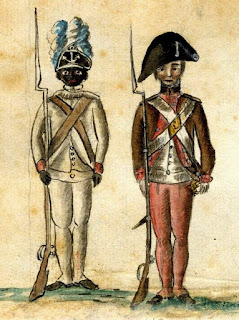 Remember these knuckleheads? Two Americans painted by a lieutenant in the Royal Deux-Ponts regiment at Yorktown. Jean-Baptiste Antoine de Verger might have captured the belted waistcoats that Lafayette wrote to President Laurens about:

if we could get materials enough it would be possible to have a large belt out of the jacket, and independent of it, which could be tide upon the belly...

A 20th-century mind might interpret this as a full belt that ties in the back like a breeches waistband. One that buttons to the waistcoat or "jacket" at front. Mine did.  A fine guess, but wrong. Kitty Calash called these things a precursor to the cummerbund, a textile ammonite.

Turns out Winterthur Museum bought the first surviving waistcoat belt without knowing it in 2014. Enter Matthew Skic. Hobbies can be useful at work. Printed linen seems weird. That it's a half belt slightly less so. This may be the best part about Progressive history recreation:  most objects didn't survive. Art and writing fill in some of the gaps. Learning the art of 18th century sewing tells you some of how they thought. When something new turns up, re-evaluate. Change is good.

The full belt worked fine this past weekend. Time to add a second buttonhole to the front of the belt, chop off about 24" and add four more buttonholes. Four more buttons on the back of the waistcoat will hide in the coat. Can't wait to see how it works.


Posted by the drunk tailor at 2:53 PM No comments: