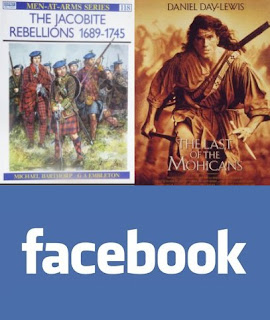 Living history folks live in a weird nether region between actual historians and cosplay/furry/costumers, mostly despised or ignored by both groups. The public couldn't care less about history. Most know nothing, so it makes wearing whatever easy. As a professional researcher for 12 years, and a mediocre tailor for nearly that long, I created this blog to fight that.

As wonderful as everything at right is, none of it is good research material. All is second-hand, someone's interpretation of the past. Word of mouth from old hand reenactors is nearly as bad.  Trust no one (including me.) Look it up. Question everything. Change is scary, but learning new things is good for your brain.

Start by looking around. Most average Americans wear blue jeans and t-shirts. Males have short to medium length hair, and some have moustaches or full beards. If you were recreating a 21st century middle class male, this and a pair of sneakers would be a safe bet. Another would be to take someone's picture and copy them exactly, but that only works if no one else does the same. Cloning creates a bias all it's own. So how do we know what 18th century people looked like?

Rich folks saved their clothes and had portraits painted, so that's easy. Go to a museum. Poor people tended to belong to someone in one way or another, so when they ran away, period newspapers become a gold mine. Each region of the colonies has it's own patterns. This is called primary source material. If it is written, made, or painted in the 18th century, we can trust it.  There are exceptions, caricatures (like Hogarth) use period symbolism to mock (men in smocks are rubes, bearded men are crazy,) so caution is required. Here is where the good historians can help. Make SURE They are using primary sources or have good notes. Otherwise, they may be repeating old lies. Read as much as possible. Look at as many prints and paintings as you can.

Probably the hardest thing to do when starting out is abandoning personal bias. Love kilts? Do Scottish. Have a beard? Be a "German." Read enough runaway ads, and look at enough art and there is little evidence of either. Haversacks are not roomy man purses for everyday wear. They are military issue kit for food. Waistcoats without a coat hardly ever appear. On the other hand, men in coats without a waistcoat show up in paintings. There were no hunting shirts in the Seven Years War, and a hunting shirt is a specific kind of garment, not a smock. Once a few reenactors do something that is uncommon, the cloning bias starts to creep in again. Take baskets, for instance. Ladies, think about other ways to carry your stuff (unless you are selling food.) If you are not going to be specific, be average. Watch out for logical traps like "I'm a poor frontier farmer, who weaves his own cloth and makes his own clothes," when all the Natives around you are well dressed in European cloth. If you are poor, why do you have a $2500 rifle?

The Bicentennial created some terrifying traditions that have hung around. Mob caps and bodices are not 18th century clothing (also, don't go out without your stays, ladies.) There is no evidence of large dining flys full of furniture and cast iron cooking sets for everyone on campaign. Space in wagons was limited (if there were any wagons.) Officer's might have some luxuries, but context is key. 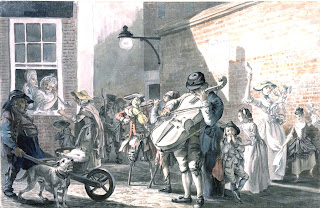 There is enough going on in this watercolor for a lifetime of research. Look closely. Ever think working poor men would put on all their clothes and not button them? When someone offers you advice on your kit thank them, then go look it up.
Posted by the drunk tailor at 9:38 AM