It's been a fantastic couple of weeks. Fort Dobbs is finally open and spectacular. The Museum of the American Revolution reprised their Occupation of Philadelphia event, so Elizabeth Weed and Thomas Nevel returned to amuse the public. Both places were an excellent chance to refine lower class and middle class 18th century characters. The servant at Dobbs was a Virginia man fleeing the frontier war who joined the Carolina Provincials and became an officer's valet. Thomas Nevel was a historic Philadelphian, one of the city's leading builders, stuck between the British, his cheapskate clients (Congress,) and his feelings for the Widow Weed. 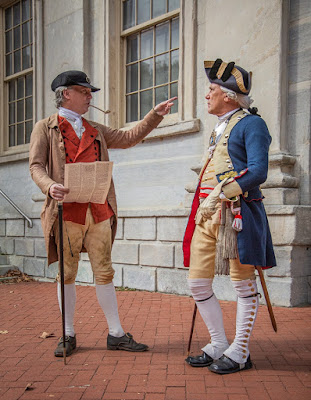 The most important part of first-person interpretation is realizing it's impossible to replicate the 18th century mindset. We have no idea how they thought. Forget about speech patterns as well. We can research their circumstances, read their writing, and place it in the greater context of history. No need to have smallpox or be filthy (a different discussion entirely.)  We can make some good guesses about how they felt through a modern lens and share that with the public. It's the easiest way to make them feel connected to the past. 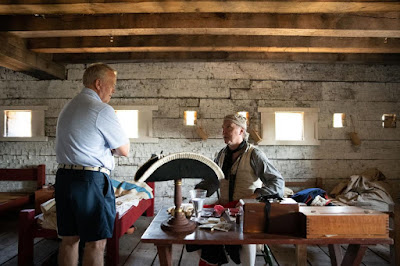 If Hamilton taught us anything it's possible to make history engaging with a bit knowledge and some theatrics. Puffing on a clay pipe, Thomas Nevel walked around Philadelphia with a stylish cane. If an approaching group smiled and made eye contact it was easy enough to ask them: "have you seen my cow?" We know Nevel owned a cow, and that the British were tearing down fences a soon as they arrived. He might talk about working on Carpenters' Hall and his house at the same time. He could mention his desire to court the Window Weed at the end of her mourning period. It's possible to break down the fourth wall and talk about why Carpenters' Hall was built and what it was used for over the years--mix first and third person.

Since Nevel was vaguely Presbyterian, and filled the Delaware river with obstacles on behalf of the rebels, he might share a pipe with the American prisoners working outside. His dress is a mix of working sort and middle class: stained leather breeches, faded frock coat, white shirt with ruffle and white neck cloth. He tried to impress the Widow Weed (since we know they married after the British left,) but she scorned his unkempt appearance and lack of income.

The valet at Fort Dobbs is a much simpler character who works twice as hard. Polish the officer's shoes, brush his clothes and hat, help him dress. Try and anticipate his needs, as well as keep him hydrated and fed. Pass him drinks on a tray, and gently scold him when he gets dirty. Provincial soldiers were the dregs of society and a servant was one step up from that. His clothing is raggedy, with a regimental coat, and he is barefoot at every opportunity. Class is a huge part of both of these characters.

When first-person comes into it's own is when several of the characters interact. None of this can be scripted and it takes practice. When one of the American prisoners in Philadelphia suddenly turned his coat and took the King's shilling there was a uproar. Nevel told him he had abandoned God, and was quickly silenced by British guards. The prisoner explained his reasons (financial) and showed his Queens Rangers broadside. The crowd got to witness the historic process of soldiers changing sides without thought for the consequences (hanging.)

Muskets aren't for everyone, especially old folks. The recreated past is better with all sorts in it.