Well that didn't go well. Making two coats at once was a huge mistake. Too many distractions. The regimental coat looks good, but doesn't fit worth a damn. Snug WITH constraint. Perhaps Kitty can make it into a riding habit. The lesson here is patterns need to be revisited and fitting patterns made for everything. Don't rush. 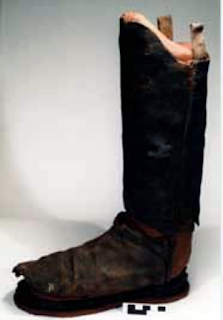 Time to shift gears a bit. This beautiful thing was found during Big Dig construction in Boston's North End. Boots have been around forever. At the start of the 19th century they became fashionable everyday wear for men. High-front "Hessians" and "Suwarrows" copied Central and Eastern European military styles. They were replaced soon after by "Wellingtons" (not the rubber kind.)

No we aren't making boots. We are taking advantage of an excellent boot maker who is flexible. The design is not unlike mid-19th century boots, with changes to the toe and heel. The canvas tabs need to be removed and replaced after the tops are cut. 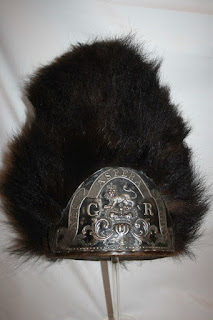 Another good winter/Apocalypse project is at right. The 1768 British Army clothing warrant gives grenadiers, fifers, drummers, pioneers, and fusiliers the authorization to wear bear skin caps. The fusiliers cap is "not so high," as the others, which are to be twelve inches tall. This fearsome headgear cost over ten times as much as the standard hat. No wonder many regiments (including the 7th Foot,) gave them up as the American War progressed.

The Royal Fusiliers DID arrive in American with them, though none survive. Construction of surviving caps was a bit of a mystery until the 1990s, when the Scottish United Services Museum started conserving the Seafield Collection. These are post-Revolution, but still follow the 1768 warrant. Pioneer, musician and grenadier caps are remarkably similiar, but for some details. Good friend Jason is using this as the basis for a fusilier version and so shall we. Trade in bear parts is legally complex, so stay tuned.